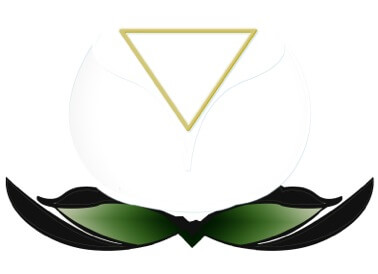 The Ajna is not really a single chakra, but a constellation of about half a dozen energy centres in the cranium. It is called the third-eye chakra not because it is situated on the forehead, but on account of its position in the middle of the cranium being directly behind the ‘third eye’ location.

Its location is the third ventricle of the brain, which is very significant, as it is surrounded by the main endocrine and neurological switchboards of the brain – the pituitary and pineal glands, the thalamus and the hypothalamus. The ventricles are filled with cerebrospinal fluid (CSF). The sacrum floats in the sacroiliac joints, performing bowing movement, pumping CSF up the spinal cord into the brain. The sacrum plays an important role in moving Kundalini up to the Ajna chakra in the third ventricle, aiming to convert Svadhishthana into a motor for our celestial evolution rather than as a servant of its animalistic tendencies.

The Ajna chakra is also the lunar storehouse of prana, and as such, directly linked to the Manipura chakra (solar prana storehouse, male, catabolic {breaking down} function). The Ajna chakra is female, nurturing and anabolic (building up). Both Ajna and Manipura are linked and harmonised through Nadi Shodhana pranayama.

The Manipura chakra dominates today’s society, while the Ajna is at this point only a vision and promise of the future. This is reflected in the fact that production facilities are male dominated, and, while everybody in a responsible position understands that we need to dissect the world, extract minerals, build factories and make profit (all male catabolic concepts), the idea that the whole planet is one living organism that needs to be nurtured (an anabolic concept) – a process that may impinge on profitability – is still considered too intuitive by many.

Whereas the Vishuddha is legislative, making you understand and see sacred law, Ajna is divinitive, – it shows you the intelligence according to which the cosmic master plan of creation unfolds.

The quality of Ajna is sattvic, as was with Vishuddha. Sattva is the intelligence particle of this world and the Ajna chakra shows you personified intelligence. This chakra has only two petals. The number of petals indicates the number of major nadis (channels) that terminate at a chakra (excluding the central energy channel, Sushumna, on which all chakras are strung like a thread). Ajna has the lowest number of nadis, but they are the most important two.

They are Ida (lunar) and Pingala (solar), which power right and left brain hemispheres, the parasympathetic and sympathetic nervous systems, the afferent and efferent nerve currents, lunar and solar mind, relativism and fundamentalism, anabolism and catabolism, and mind and body respectively. The place where Ida and Pingala meet Sushumna (Mukti Triveni) is the liberating triple confluence. If prana is placed into Ajna chakra, Ida and Pingala are both suspended and the mystical state ensues.

Ida and Pingala are essential for our functioning, but they prevent the mystical state by making us fall for one of the two extremes of the mind. They make us fall prey to duality, i.e. solar or lunar mind. The solar mind believes that only one truth exists and fails to recognise the many other truths (fundamentalism). The lunar mind falls into the trap of relativism, where one recognises the many truths but fails to see the one truth. If both nadis are suspended, for the time of their suspension, one can see reality as such without using the categorising and dichotomising mind. During that, one is beyond time and beyond death, as Hatha Yoga Pradipika confirms.

Related to Ajna are two of sage Patanjali’s ethical guidelines, the niyamas svadhyaya and Ishvara pranidhana. Svadhyaya is the study of sacred texts, without any preconceived and confused ideas created by people, trying to reconnect to the original vision of the seers of any tradition. The second observance (niyama) of Patanjali relating to Ajna chakra, Ishvara pranidhana means surrendering to your chosen form of the Divine. In an early stage we simply pray and ask the Divine for guidance. We ask for our lower and selfish urges to be purged and our inclination towards the sacred to be strengthened. Then we ask for divine guidance to point us in the direction that we should take. Eventually, we step aside more and more and let the Divine act through us – let the Divine perform its will through us.’

Chakra meditation visualising two-petal white lotus in the third ventricle and mental recitation of the mantra OM is the practice for the opening of Ajna chakra. As well as Nadi Shuddhi and Nadi Shodhana pranayama.

With gratitude for these teachings to Gregor Maehle’s book ‘Yoga Meditation’.